Posted by: Linux India in Linux Magazine May 29, 2021 Comments Off on Reader Survey Results 30 Views

Responses showed that the first priority for Linux users is the porting of a WYSIWYG word processor.

Last March we asked readers for feedback about what they wanted to see happen with Linux. We got responses from all over the world—Israel, Italy, Belgium, UK, Netherlands, Japan, Thailand, Austria, Germany, and the US. Although our survey wasn’t entirely scientific, this response hints at the wide-spread implementation of Linux.

Responses showed that the first priority for Linux users is the porting of a WYSIWYG word processor. Microsoft Word was the number one choice, followed by WordPerfect, AMIPro, and FrameMaker. The second category on the wish list was a good database program, with the number one choice Microsoft Excel. Requests for other ports included CAD programs, Motif, fax software, and Lotus 1[hy]2[hy]3. See “Stop the Presses”, this issue, for an update on WordPerfect for Linux, and “Moo-tiff Development Environment”, this issue, and “Motif for Linux”, July, 1995, for reviews of Motif ports for Linux.

Emacs was the most frequently-listed application used by readers. Maybe it has a built-in command for filling in “emacs” on any questionnaire. Netscape was the next most frequently-listed application. Many other Net and Web tools were included in the 63 different applications people listed. Text processing tools, e-mail tools, graphics tools, and databases were also popular. Only four readers listed vi variants, maybe because vi users think of it as a utility rather than an application. This will probably provide plenty of fuel for Emacs versus vi discussions.

Readers used a montage of operating systems—Linux was the most popular, of course, with other flavors of Unix (SunOs, Solaris, Ultrix, Dynix, etc.) and DOS also showing up frequently. OS/2, VMS, Mac/OS, Windows NT, and NeXT were also listed. Twenty-six different operating systems, including all the Unix variants, were listed.

Linux Journal readers program in a variety of languages. C was most popular, followed by C++, Tk/Tcl, perl, and FORTRAN. FORTRAN? Twenty-five different languages were listed.

If nothing else, these results show that Linux Journal readers, and by extension Linux users in general, are a diverse bunch. 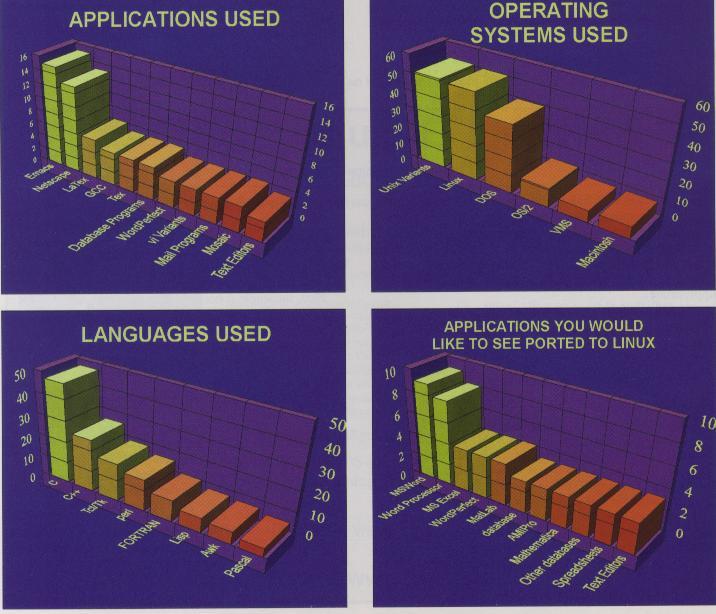