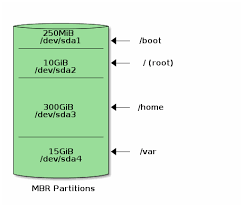 Posted by: Linux India in Linux Support July 27, 2021 Comments Off on Partitioning and Cylinders 0 Views

I am installing Red Hat Linux 6.0 on a partition. When I try to make my partitions for Linux, it gives me an error saying “boot partition too big”. I tried to use fdisk and it says my hard drive has 1655 cylinders, not 1024, and it will cause problems. How can I get around this? —Will Brown, willj3@mindspring.com

Create a primary partition (the first one) with 10MB; its mount point should be /boot. This is the directory where all the boot images reside, and it needs to be under the 1024 cylinder. The root partition (/) can then be any size, and will not have any problems. —Paulo Wollny, paulo@wollny.com.br

I am setting up a small LAN at home with a server running Red Hat 6.1 and a workstation running Windows 98. I’ve set each up with a static IP address (192.168.1.1-2) and a netmask of 255.255.255.0. My problem is that I can’t even ping my Linux box using the host name. I can ping it using the IP address, and I can ping my Windows 98 box from the Linux box using either the host name or the IP address. I’d appreciate any suggestions you may have.

I had an older version of Linux (Red Hat 5.3, I believe) on the server, and it was working perfectly. I’ve set up the 6.1 version the same way and it won’t work. —Greg Wright, grewright@netzero.net

You didn’t mention whether you’ve configured DNS services at home, so I’ll assume you have not. In that case, you need to add an entry to your c:\windows\hosts file. List the IP address of the system you are trying to ping, followed by the host name you wish to use in your ping test. Be sure you do not include the domain name in this entry. You can copy the file hosts.sam if you need a sample. —Chad Robinson, Chad.Robinson@brt.com

I am using SuSE 6.3 and had two networks, one at the main office (192.168.1.0) and the other at the branch (192.168.2.0). I used two Cisco 800 routers to connect them. I can use TCP/IP normally (ping, ftp, http from one host to another). My problem is I cannot see the remote PCs in Windows Explorer at the office. I configured a Linux server with DNS, mail and FTP, but it still doesn’t work. At the office, I’m running IPX (there is a Netware 3.11 server) and TCP/IP protocols. Someone told me I must set up a Windows NT running WINS service. I don’t want to install Windows NT. Any ideas? —Carlos Germán Siufi, csiufi@puntoar.net.ar

This question involves Windows networking, and more specifically, netbios name lookup. Netbios, which is at the core of Windows networking, was very badly designed and grew from there. While UNIX uses DNS for name lookup, Windows originally used a complicated name lookup scheme based on the election of a local name browser on your subnet and broadcast queries for each name lookup. Because it is broadcast-based, it doesn’t work across subnets (which is your configuration), and it was “improved” with the addition of WINS.

The typical solution is indeed to use a WINS server, which is some kind of dynamic DNS equivalent, although it isn’t as robust. However, you do not need to run Windows to provide WINS service; Samba (http://www.samba.org/) can do this just fine. While using a WINS server would typically require you to configure each Windows machine, Samba can function as a proxy between local broadcast queries and a remote WINS server. You ought to grab Samba and read its documentation for more info. You may also want to consider getting one of the Samba books. —Marc Merlin, marc_bts@valinux.com

I need to know how to set my display mode when I start the X Window System. It always runs X at 320×300 or something really huge and I can’t do anything. I use—Jim, jim@stat.net

Red Hat’s X configuration tool is called Xconfigurator. If it doesn’t work for you, then you should first check that your graphics card is supported by your version of XFree86 at http://www.xfree86.org/#resources/. It may be that your video card is supported by a later version of X, in which case you should upgrade. If your video card is recent, it is most likely Vesa 2-compatible, and you can use the VesaFB server: http://www.xfree86.org/FAQ/#FBDev/. —Marc Merlin, marc_bts@valinux.com

I want to convert my existing proxy server for my home network to Linux. But every distribution I have used has never detected both network cards until SuSE 6.3. I can manually get the card on the LAN to find the DHCP server, and the NT gives it an IP address, but can never ping that server; if I change it to a static IP address, it pings the NT server fine. The real problem is I have a cable modem on the other NIC, on which I have set up DHCPclient. I have viewed and edited the sbin/init.d/dhclient file to make sure it has the ifconfig $NETDEV 0.0.0.0 up statement in it. I have read the FAQ and I still cannot get this to work. —Stephen Heaton, srheaton@mediaone.net

All recent distributions work more or less the same in regard to more than one Ethernet card if they are PCI, as they can all be autodetected easily. You may, however, need to add an alias for eth1 in /etc/conf.modules. For example, your conf.modules could look like this:

After that, you simply need to ifconfig each card in the usual fashion.

Are you sure that Linux does receive a correct IP, netmask and broadcast from the DHCP server? You should type ifconfig eth0 (or eth1) and compare the info you’re getting from DHCP with the info you’re setting by hand.

The last part, I’m not too sure about. I myself haven’t had much luck with SuSE’s DHCP client, while Red Hat’s dhcp client has worked better for me with no special configuration required. —Marc Merlin, marc_bts@valinux.com