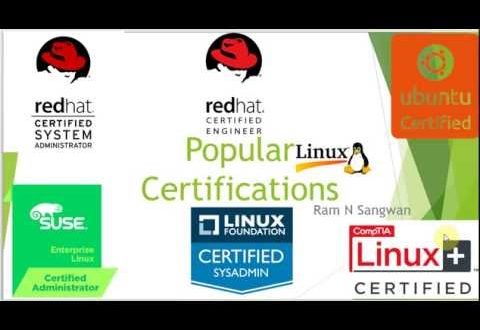 Posted by: Linux India in Linux Magazine September 2, 2021 Comments Off on Why Be Certified? 0 Views

One camp, often referred to as the “live free or die” followers, believes there is no reason to be certified. Their assumption is that because Linux—unlike such competitors as Microsoft and Novell—is open-source software that can be downloaded free off the Internet, knowledge and practical skill development come with hands-on, job-related experience and will not necessarily be bolstered by certification.

An opposing view, however, is that certification means validation. If a third party, or independent source, tests your skills and finds you possess the knowledge to run a complex operating system—one that is predicted to grow faster over the next four years than all other operating systems combined, it can benefit both the IT professional and the company that hires him or her.

The problem is not unlike owning a $100,000 Porsche and trusting it to a certified service representative over a gas station mechanic with no concrete credentials.

Certification means money, both to the company and the certified employee. The benefits to the company are numerous. Research by International Data Corporation (IDC) shows IT managers trained and certified in Microsoft, Novell and Cisco programming have a positive impact in the workplace. The same will hold true with certified Linux professionals.

The certified shop is apt to be more efficient and productive. A certified IT employee can usually configure a desktop or server in a more timely manner than one who is not certified. The properly trained Linux programmer will be able to keep the server up and running, while some noncertified employees may depend on trial and error.

A certified shop can traditionally handle twice as much equipment as a noncertified shop, and a certified shop of employees can usually create a much more elaborate and complex network configuration.

In general, the cost of training pays for itself in just nine months. Additionally, certification is frequently used by IT and human resource managers to weed through stacks of résumés.

For the certified employee, benefits include higher salary, more job satisfaction, job security and greater knowledge that leads to more independence. More often than not, numero uno in the employee’s book is better pay. Studies have shown certification in a desired skill such as Linux will lead to salary increases of $5-$10 per hour over noncertified peers. That translates to a $10-$20,000 increase per year in salary. Some find that certification also brings a sense of accomplishment and greater job satisfaction. So why Linux instead of those proprietary operating systems?

As already mentioned, Linux has emerged as the number two operating system worldwide and is predicted to grow faster than all other operating systems combined. A recent poll of more than 2,000 IT managers by Survey.com, an on-line research service, indicated a planned 500% increase in applications development for Linux over the next two years. International Data Corporation reports that while Linux is not a major market at the moment (estimated at $56 million for 2001), Linux support revenue will increase to $285 million in 2004, a compound annual growth rate of 86.9%.

Louis Gerstner, IBM’s president and CEO, sent shock waves through the technology world in December when he announced the technology giant would invest $1 billion in Linux in 2001 alone. He called Linux the best way to meet demands on the Internet.

IBM’s track record bodes well for the future of Linux. The personal computer had been around for almost ten years before IBM, in 1983, introduced a PC that revolutionized the technology. The rest, as they say, is history.

IBM stated its belief in Linux as early as January 10, 1999, when it proclaimed in a New York Times story that Linux would be the third wave in computer technology, following the PC and the Internet.

IBM is not the only company out there using Linux. Others include Sony Electronics, ZDNet, Sallie Mae, Boeing and Compaq, just to name a few. Linux will not be a one-size-fits-all approach for every company’s technology needs. But nearly all companies will benefit by using Linux in certain applications.

Being vendor-neutral allows us to offer comprehensive training by offering instruction in a minimum of seven different Linux versions. We believe certification tied to a specific vendor will ultimately succeed or fail depending on that vendor’s success.

Our results are not based on “psychometric” normative data. Instead, results are absolute; each exam contains 50 questions and 37 (or 74%) must be answered correctly for a passing grade. It does not matter what Joe or Hildegard scored on the test, all that matters is that you demonstrate mastery of the material by scoring 74% or better.

Level I provides a lengthy peer-reviewed and solid foundation of Linux education and contains four exams. You earn the Sair Linux and GNU Certified Professional (LCP) designation after passing either of the two initial exams: Installation and Configuration or System Administration. The Sair Linux and GNU Certified Administrator (LCA) designation is earned upon successful completion of the remaining two Level I exams: Networking and Security, and Ethics and Privacy.

The Sair Linux and GNU Certified Engineer (LCE) designation is earned by passing the Core Concepts and Practices (CCP) course and three elective courses. The curriculum is known as AMPS, an acronym derived from the many applications that run on Linux. Currently there are seven electives to choose from with more to be unveiled this year. AMPS allows candidates to select the applications that match their job descriptions. Do you want to be a web service provider? Or do you want to be a system administrator or work in a highly secured environment? You can custom-tailor your courseware based on how you plan to use Linux and GNU software.

A third level, that of Linux Certified Master Engineer, will be announced in 2002.

Naysayers may continue to look down on certification and training. And if they want to think certification is silly, that’s fine. They can sit in their ivory towers and program. But, to paraphrase Shakespeare, “Wherefore art thou?”

Tobin Maginnis is the president and chief executive officer of Sair Linux and GNU Certification. He also is an associate professor of computer science at the University of Mississippi. He can be reached at ptm@sairinc.com.

Previous: An Accurate Assessment?
Next: PHP Can’t Connect to MySQL

Richard Vernon Issue #85, May 2001 This month’s feature articles show that even with the ...