Posted by: Linux India in Linux Magazine June 8, 2021 Comments Off on Linux Expo at Union Bank of Switzerland 29 Views

Promoting Linux in the workplace…

During the summer of 1997, employees of the Union Bank of Switzerland (UBS) put on a one-month expo to showcase Linux. This article describes how and why we did it.

I work in the system development section (SYBS—System and Basic Services) where we mainly use workstations and servers running Solaris 2.5.1. We produce our own “repackaged” Solaris release, named OpenLAN, which is used on the production Unix servers. The OpenLAN release includes Perl, tcl/tk, et al.—the normal set of Unix tools in a package format. Notice the world “package” above. All software is delivered in a Solaris (Sys V) package for easy installation and removal.

Quite a few of the employees have a PC at home and for those working with or on the Unix side, it is (or would be) quite natural to install Linux at home. Linux provides an ideal environment for learning more about Unix in general, system administration and Unix tools. Also, a Linux system is neither resource hungry nor expensive to set up. Today it is possible to buy a shrink-wrapped installation on a CD-ROM, and you do not need to be technical expert to install Linux on your machine.

In the building where our section is located, there is an area which is used for one-month expositions about different subjects. The subjects range from information about different parts of UBS, security policies or employees’ personal interests: astronomy, model plane flying, etc. The available area is approximately four by four meters with two panels for posters.

Last summer, Alois Camenzind thought that a small Linux expo would be a good idea. This would enable us to spread information about Linux and its uses—let others know that Linux is a “real” Unix system. After getting the “Okay”, Camenzind contacted employees within the section who had expressed both knowledge and interest in Linux. We formed an unofficial workgroup to prepare the Expo. The main work was producing posters with information about Linux and Linus Torvalds, getting resources (machines), setting up the machines and contacting interested companies for information and products. 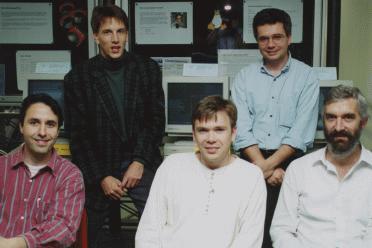 We ended up with two Intel 486 Compaq boxes which were set up running Linux kernel version 2.0.12 (the latest stable release at that time). We used the Red Hat Rembrandt Beta II distribution provided to us by Red Hat. A SPARCstation 5, running kernel version 2.0.16 with the SPARC Red Hat distribution, was also on display to show multiple platform support.

We set up an Apache 1.1.1 WWW server running on of one of the Compaq machines. This WWW server had a preloaded cache with HTML pages from the SSC web site, http://sunsite.unc.edu/, the Swiss Linux User Group and other interesting Linux-related web sites. Since we were behind a firewall, we opted to load the cache on an Apache proxy server to make information generally available during the Expo.

The same machine also served as an NFS server for the smaller Compaq on which we stored the binaries and sources. The NFS server made it possible for interested people within UBS to obtain more information via HTTP or to mount the exported file system via NFS to get up-to-date kernel sources.

X11 was running on all machines, as well as a subset of the application packages provided in the distribution as an example of what kinds of software are included in a typical Linux distribution. To show an example of a commercial application running under Linux, we installed a demonstration copy of Applixware. We configured the machine to start Netscape whenever a user logged in, displaying our WWW server home page with pointers to the cached pages and other collected material. This was our invitation to the user to start browsing and discover more information about Linux. 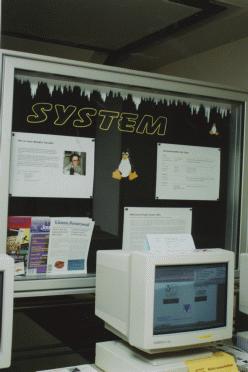 Behind the machines (see photographs) were the panels with posters about Linux (all in German): “What is Linux?”, “Information sources for Linux”, “The GNU General Public License (GPL)”, “Linux Development History”, “Linux Time Line” and “Who is Linus Torvalds”. We also made information provided by SSC and Red Hat available beside the machines.

During display, anyone could just walk up to one of them and log in. Then (s)he could playing with the system, start X applications or just browse the local web via Netscape. We also provided a mirror of the latest release of the kernel as well as a Linux distribution which the user could copy.

The machines and materials were on display without anyone from the workgroup watching or being there, other than during lunch time or coffee breaks. The whole idea was to have a display which invited people to sit down and explore the Linux systems.

Walking by the area at different times during the day (or for some of us—nights or evenings), there were always people playing with the Linux machines. Taking into account that most of the material (SCC flyers, etc.) put on display had to be renewed every week, we felt people were quite interested in what Linux had to offer.

Most of our time was spent getting the information about Linux and its history from the Net, preparing the demonstration machines, making the presentation panels and setting up the WWW cache. Once everything was in place, we only had to update the mirror material and occasionally reboot the machines to insure proper operation.

Martin Sjolin moved to Zurich (Switzerland) in July 1995, where he works at UBS dealing with System Management issues for Solaris machines. He has recently begun to explore NT 4.0. In his spare time he enjoys telemark skiing, cooking, running, windsurfing, reading and, of course, hacking his Linux systems. He can be reached via e-mail at marsj@sjolin.ch.