Posted by: Linux India in Linux Magazine May 28, 2021 Comments Off on Linus Torvalds Receives Award 34 Views

San Francisco, February 16, 1995—In conjuction with its 20th year of publication, Dr. Dobb’s Journal magazine honored outstanding achievement in the field of computer programming by hosting the first annual “Excellence in Programming” awards at the Software Development `95 conference. Awards were presented to Alexander Stepanov, for his development of the C++ Standard Template Library (STL) and Linus Torvalds, creator of the Linux operating system. Richard Guggenheim, honorary council of Finland, was present to accept the award for Torvalds.

In his presentation, Phil Hughes, president of Specialized Systems Consultants and publisher of Linux Journal, discussed why Linus should receive this award for the most innovative software product of 1994. “Lots of software was designed in 1995. I see the key here as being innovative. Innovation can consist of development of a new type of product. For example, Multiplan, the first spreadsheet was innovative,” Hughes said.

He continued, “Linux is innovative in a very different way. While Linux is another Unix-like system, its development has been done in a totally unique fashion. Linus started the development effort but managed to continue his work in such an open manner that it made possible and even encouraged others to get involved in the effort.

Thousands of individuals have contributed to the effort to make Linux what it is today but Linus gets credit for the innovation. After all, he did manage to get these thousands of people to work on the development of Linux and the serious innovation is that he managed to get them to do all the work for free.”

Mr. Torvalds almost single-handedly implemented true innovation in operation-system kernel design while achieving 100 percent UNIX System V compatibility—something even commercially-available systems have not accomplished. Torvalds is a student at the University of Helsinki in Finland. 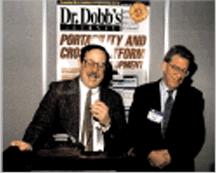 Previous: A New Project or a GNU Project?
Next: Linux at the UW Computer Fair