A report from Germany on the world’s largest computer fair.

CeBIT is the world’s largest computer fair, bringing together vendors and attendees from many different countries. If you picture landscaped fairgrounds with 27 halls for vendors and even more auxiliary buildings with stores and restaurants and then add 650,000 people to the picture, all visiting the location over seven days, you are starting to get an image of CeBIT ’97. CeBIT took place in the Messegelände in Hannover, Germany, March 13th to 19th, 1997. 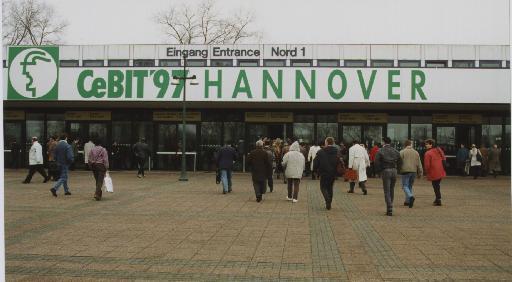 Figure 1. The North entrance to CeBIT

This was my first time attending CeBIT, and my goal was to look at the Linux vendors and possibly talk about Linux to vendors whose software already runs under other Unix platforms. I also wanted to see what such a huge computer fair would be like and contrast it to the US’s largest computer fair, Comdex, in Las Vegas, which I have attended the past seven years.

My first stop was Hall 11 to visit Caldera, Inc. Caldera’s booth was easily recognizable as a Linux booth because of “Tux” the penguin, (well, a stuffed rendition of Tux) sitting on top of one of the monitors. Caldera’s booth was crowded with people every time I visited it. 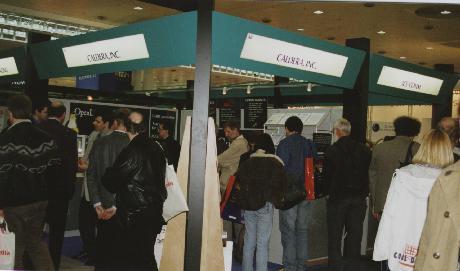 Figure 2. A crowd in Caldera’s booth

Attendees were interested in Caldera’s OpenLinux products and getting information about Linux and Linux products. The 1500 Linux Journal Buyer’s Guides given away by Caldera and their affiliated booths during CeBIT, also seemed to be a hit with attendees. Caldera also provided information about OpenDOS 7.01, which is free for non-commercial and educational use. Caldera’s booth staff talked about recent announcements such as the upcoming port of Netscape software to OpenLinux, and the port of StarOffice 3.1 to OpenLinux. 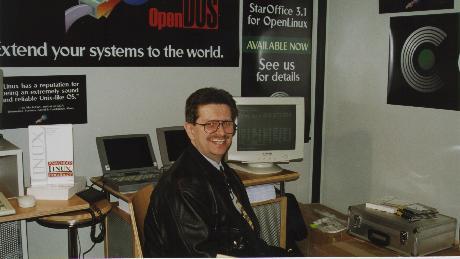 A German television station, Bayerischer Rundfunk, filmed a short TV show about Linux at the Caldera booth. The “TV host” Jurgend Plate warmed up for a few minutes while the film crew continued to set up equipment. Before they started filming, after I identified myself as the Associate Publisher of Linux Journal, Jurgend hollered to me that LJ was “das beste Magazin auf der Welt!” I was told by Sebastian Hetze of LunetIX, that Jurgend Plate had been excited about Linux for years and that his exuberance over Linux was real.

A second Linux stop for me was at the large StarOffice booth in Hall 2 demonstrated on of the company’s many different ports, StarOffice on OpenLinux.

At the the third Linux stop, the large Software AG booth, there was a signpost saying Datenbanktechnologie and the second sign down said “ADABAS & LINUX”. Tux sat proudly on top of the workstation here by the Caldera OpenLinux Base. Nathan Guinn gave me a free review copy of the single-user version of LunetIX’s ADABAS, an SQL Database, which I passed along to the Editor of Linux Journal. 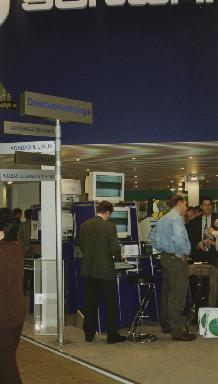 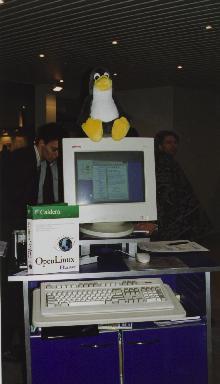 Figure 5: Tux at the Caldera and LunetIX display at Software AG’s booth

A fourth company with a Linux product was NAG Ltd, which, among its other products, provided information on their Linux FORTRAN 90 Compiler.

Other companies, such as LST Software, GmBH and LunetIX had representatives at the show, mostly working out of Caldera’s booth.

There was some press coverage about Linux. In the special CeBIT section of the Newspaper called “COMPUTER & KOMMUNIKATION” there was a full-page article titled “Linux schultert Microsoft-Anwendungen” which covered the capability of Microsoft Applications to run under Linux using Caldera’s Wabi software.

All in all, CeBIT was an informative, busy, intensive, show. Next time I should like to try it without crutches resulting from a sprained ankle. I should also mention the color shows and performances in some booths, including a musical story (D2-Musical) with “Princess Digital, the Queen of the World”, the artistic acrobats at VIAG Interkom and many cabaret-style performances, which added fun, colorful and entertaining diversions to CeBIT.

Belinda Frazier is the Associate Publisher of Linux Journal. She can be reached via e-mail at info@linuxjournal.com.