Linus Torvalds tells the Silicon Valley users group about his current work on the Linux kernel.

When we gave the job of arranging speakers to Sam Ockman, we never doubted his ability to bring in terrific speakers. His first speaker, for our January meeting, was his personal hero, H. Peter Anvin. For February, we had two speakers: Eric Raymond of “The Cathedral and the Bazaar” fame, and Bruce Perens of Debian. Therefore, the question became “How do you top these Linux luminaries?” Sam’s answer was our March speaker, Linus Torvalds.

Until December, the Silicon Valley Linux Users Group (of which I am the Vice President) met in the back dining room of the local Carl’s Jr. (local burger chain). Carl’s could hold around 40-50 people tightly. We had been talking about moving the meeting from this spot for some time, and some of our members who worked at Cisco pleaded to get a room for us for the meeting in February. As expected, this meeting was standing room only, and we knew that with Linus coming we needed a much larger space. Again, Cisco (with Ben Woodard pushing it through) came through for us with a room spacious enough for 350 people in their Gateway Conference center. 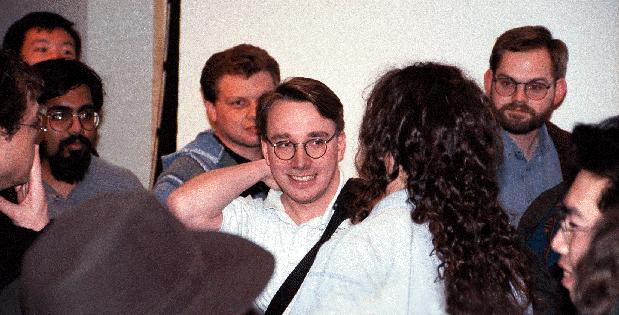 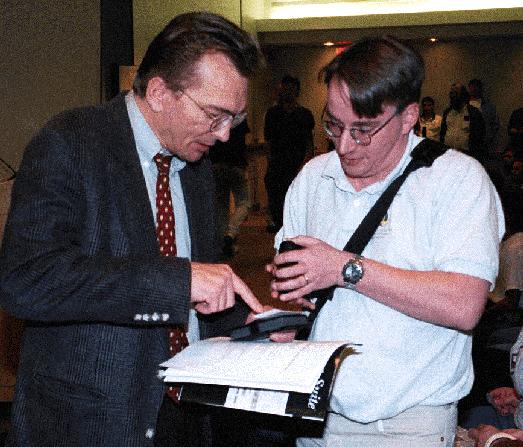 About half an hour before the meeting began, the chairs were full and people began to sit on the floor, against the walls and all around the room. Approximately 500 people had come to hear Linus speak. We were lucky—the air conditioning was in good shape, and the fire marshal didn’t show up.

The meeting began and after the user-group formalities were complete, Linus was presented with the VA Research Excellence in Open Source Software Award, co-sponsored by Red Hat and O’Reilly. The prize was a loaded dual Pentium 333 from VA Research. In fact, Linus made out very well, receiving not only the computer just mentioned, but also a PalmPilot professional from Klaus Schulz of 3Com and a six-pack of real beer from local legend Rick Moen. It should be noted that Linus didn’t know about any of these awards before coming to the meeting. 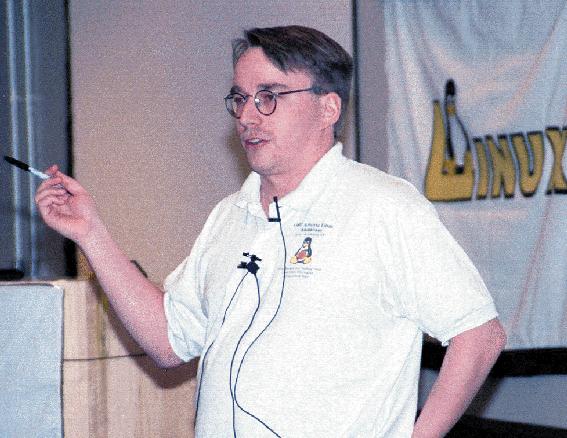 Accompanied by thunderous applause, Linus stood before the podium and expressed his shock at the number of people who had shown up to hear him speak. He had been under the impression that it would be a small, intimate meeting like the first one he attended last year at the burger joint.

The hour-long speech (not counting the Q&A afterward) was a technical discussion of how he is improving SMP (symmetric multi-processing) support in the kernel. He talked about the challenges of moving from a single kernel resource lock for all CPUs as in the 2.0.x kernels to individual resource locks for the new kernels. He discussed the ways these changes affect things internally for the kernel, and how it affects the handling of shared memory, interrupts and I/O. Linus also spent some time talking about how the file system is being changed internally for better performance. The speech will be available on-line by the time this article goes to print (see Resources); I’d recommend that you download it and listen to the whole thing. 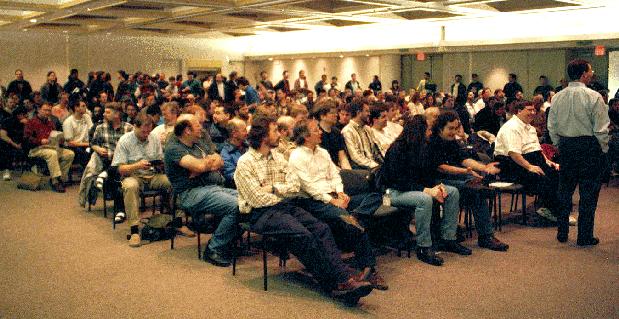 In addition to videotaping the speech and taking still photos, the meeting in its entirety was broadcast over the MBone (Internet protocol multicast backbone). After Linus had finished speaking, the door prizes were given out, and everyone left the meeting happier and smarter than they were the day before. Special thanks are due to Linus Torvalds for speaking and to everyone else involved in making this meeting a success.

Chris DiBona is a computer security specialist for StrongCrypto Inc. He can be reached at chris@dibona.com. His personal web site is located at http://www.dibona.com/.