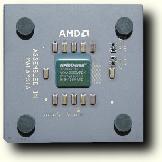 A $70 CPU may be all that you need for responsive word processing, photo editing, and coding. We take a first look at AMD’s Duron, an excellent choice for midrange desktop Linux machines.

I have seen the future of desktop Linux systems, and its name is Duron. A lot of economy-minded Linux hobbyists became AMD K6 fans back when Intel’s offerings were either pricey Pentium II or wimpy early Celeron. AMD is still cranking out perfectly respectable K6-2s and -3s that will do very nicely for most of today’s applications. But, software gets bigger about as fast as users get less patient, so the Duron looks ready to step into K6’s role as the CPU of choice for people who need responsiveness more than extreme processor power. That is, most users. A CPU that’s too fast is a waste of money, so you’re better off sticking with the economy CPU and spending your money on the other components.

A 600MHz Duron costs somewhere around $60-$70 (US) right now, and this is cheaper than the Intel Celeron. And clock-for-clock, Duron beats Celeron. So if you need an “Intel Inside” sticker for some reason, buy that separately instead of paying the extra 20 bucks to get the CPU that comes with it. Basically, a Duron is an AMD Athlon with a couple of minuses and one plus. It has less cache than the higher-priced Athlon and is not available at the fastest clock speeds. But, Duron comes in the “Socket A” form factor, which just seems sturdier than slot CPUs and is lower to the board, allowing for smaller cases.

All this would be very nice for hackers, but not terribly relevant for the business desktop market, if all we had was last year’s desktop applications. But now, Sun’s decision to release StarOffice under the GNU GPL is a big opportunity for IT departments looking to save money at the cost of subjecting Microsoft-Office desktop users to a little pain and suffering in terms of compatibility and training.

Most corporations are probably going to play it “safe” for now, and throw money at licensing and Windows support staff to preserve the Microsoft Office status quo. If your company has an Excel or Access power user among the executives, that’s all you can do, short-term. Just as companies moved out of vibrant cities into brain-dead suburbs in the 1970s to be close to where the boss lives, your employer will probably keep Microsoft Office because that’s what the executives know. But, if your big cheeses don’t have any computer skills, they’re going to complain equally about whatever desktop applications you give them. You might as well go with the no-license-fee, easy-to-support GPL alternative, so they don’t complain about the IT budget too. Be realistic.

StarOffice and Duron are the enabling technology for a big boom in Linux desktop systems. But Linux vendors are all building servers, servers, servers, right? Wrong. ASL, Inc. is a Linux vendor that has been quietly plugging away since 1995. Even though most of the other Linux vendors have been racking up server sales almost exclusively, ASL’s President and CEO, Jeff Nguyen, says that their business has been about 50/50 servers and workstations. The company recently chose the desktop-friendly Mandrake distribution as its default install. They’re now rolling out a line of Duron-based desktop systems.

ASL’s Duron box came with a slick, professional out-of-box experience. The packing slip, complete with a full list of components, is a good thing to have on file in case you ever need to reinstall software. The mouse, keyboard, power cord and manuals were packed nicely on top of a convenient lift-off cardboard insert, and the machine itself came out and practically set itself up.

I can never resist taking a peek inside the case when the system arrives, so one thumbscrew and two Philips later, I was looking at the ASL system’s guts. The case opens up all the way around—pop the thumbscrew and the top slides off, then the sides slide up. Quality components throughout—IBM hard drive, Matrox video card, Ensoniq sound and the same Intel Ethernet card everybody uses. Motherboard chipset by VIA, a company that built a good reputation for solid K6 chipsets. If you’re like most Linux users, you never put all the screws back in, so rest assured that this case stays together with just the thumbscrew.

But is it fast? Realizing the essential bogusness of benchmarks as applied to regular desktop use, I ran the GIMP, xaos, and other CPU-hog programs on the Duron, alongside the same programs on a much more expensive Athlon system clocked at 800MHz. And you know what? The speed is indistinguishable. If you want to crack RSA keys or do heavy rendering, you should probably look at times posted by people who use your software of choice; for regular use, just get the Duron. The pre-GPL StarOffice 5.1, in particular, was nice and responsive, and I would be happy to find this machine in my cubicle upon starting a new job.

Although it has one little Duron CPU and one IDE hard drive, the fans installed on the prototype look adequate for a much hotter system. It’s a big case, about the same size as the one VA Linux Systems used for dual Xeon workstations. And the fans, front and back, are loud. Like web server loud. All this to cool one IDE drive and one little socketed CPU?

The noisy fans are going away, but I ran into a couple of problems with ASL’s preinstalled software. First, the kernel wasn’t configured to support DHCP, which is surprising for a desktop system. However, you can expect DHCP out of the box if you order an ASL system now; John Kim, a Linux system engineer at ASL, says they’ll be making DHCP work out of the box now that I’ve brought it to their attention. An easy fix for them to do, since anybody can customize Linux.

Second, I ran into a problem with mangled fonts in StarOffice when running the Accelerated-X from Xi Graphics that ASL installs by default. I reloaded the box with the stock Mandrake disks supplied, and the problem didn’t show up under XFree86. Kim says that ASL is going to try to replicate the problem and check into it with Xi Graphics, but no word back from them yet.

Fortunately, this is not really a problem. You can order the system without the proprietary X server, and if you’re going out on a limb to put free software on the business desktop, why leave yourself with one piece of proprietary software to track? The Accelerated-X install requires you to enter a serial number from the package, which is just not worth the hassle. XFree86 works, works well and installs automatically if you set things up right. Even if you’re not going to hack or customize it at all, proprietary software bought and paid for is still inferior to the free stuff because of the administration burden of keeping track of licenses.

Despite the glitches, I can recommend this machine for almost everyone, and especially for people who have to keep track of an office full of them. Duron is a good CPU, all the other components are top-quality, and ASL has experience in the Linux desktop business. Order one of ASL’s Duron boxes with your company’s choice of free software—they’ll do custom loads for you—but be sure to ask them to hold the proprietary X server. Otherwise, what’s the point?

Don Marti is the technical editor for Linux Journal. He can be reached at info@linuxjournal.com.

Previous: Building the Ultimate Linux Workstation
Next: The Return of the Revenge of the Killer $800 Linux Box